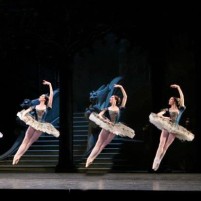 Pointe Shoe Brands All Over the World

Aww shucks, some people just do it better! (Or at least every day)

Like thousands of ballet dancers, Pavel Dmitrichenko is focused on one goal – getting on stage at the Bolshoi Ballet. Source: ‘I am ready to return to the stage’ says dancer convicted of infamous Bolshoi acid attack

Here is an interview with a ballet dancer, who takes the adage seriously, “actions speak louder than words.” It also exhibits her real belief in others’ abilities to dance if they can only be taught. It shows she is really willing to give her time to make this possible. A glimmer, and a faint hope can turn an idea into an exciting and real opportunity to change some lives if the persistence to make that happen one way or the other rallies.

Her desire seems simple. I think it comes from someone helping you, reach a certain pinnacle, and you wanting to give back-carry that torch. I doubt there are many interviews like this one in the world of ballet, or that the ones that do exist are as innocent and heartfelt, as this one obviously is. That is why I feel it is important. It shows another aspect of the dancing chain, that dancers and ballet are not one-sided.

I admire Keenan for trying to help people to overcome issues and obstacles in their lives, teach discipline, strengthen and empower them with physical or other disabilities. Dance is also a language to communicate dreams, hopes, and to express emotions and thoughts, without which we might otherwise might feel powerless to express in conventional forms of communication.

I had an autistic friend when I was a child. He really was more sensitive, more attentive to you, more focused. He reached right into your soul-directly, sometimes too intensely, and he held you accountable, forced you to be real with him. He could do all of the things he wanted to physically, without filters, and completely express himself, though not as well verbally, but people generally didn’t listen to him. This frustrated him, as you would be frustrated if someone wasn’t listening to you. He was speaking.

I have known other serious (non-autistic) artists who were able to communicate through their instrument more effectively than with words, especially in music-it is very nearly the same idea.  If ballet and dance are perceived more as languages, and art, and less sport, people would get it.

Perhaps this is an aspect of Keenan that will bring her, and those she helps,  tangible rewards! It seems Ms. Kampa’s thinking is in the long range, very astute! Reblogged from Ballet’s Best Photographs for posterity.

Come back soon! View all posts by AFB